The elected president through US election poll 2020 would have to deal with the burgeoning health and financial crises in the country.

The US election polls 2020 started on the 3rd of November. The poll started from Vermont. Amid the deadly pandemic, more than 100 million people have cast their ballot in early voting. Until now, Joe Biden is leading the national polls of the country. However, the destiny of the prospective US president is dependent on the declaration of election result.

In the previous elections held in 2016, Hillary Clinton led the polls and her votes were much higher than that of Trump but at the end, Trump won the election. So no one can predict the final outcome yet unless and until an offial result is announced.

In the wake of election campaigns, both the competitors spend the final hours whilst rallying in the states.

Read Here: US election: Regime of Donald Trump to be back

In the US, 270 votes are required by the candidate to be considered as president. This system is known as electoral college. Each US state gets a certain number of votes on the account of its population. This makes up a total of 538 for grabs.

The latest updates on US election polls

The latest updates of US election polls 2020 are mentioned below. 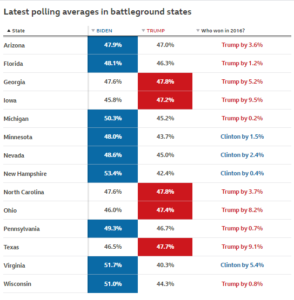 The polling updates in the 14 US states show that Joe Biden is leading the polls until now with a visible and prominent figure. On the other hand, Trump is right behind him. Biden won the polls in 9 states out of 14 whereas, Trump led only in 5 states which could be a dominant sign of victory for Joe Biden.

The condition of party supporters

Supporters and fans at both ends are supporting their preferred leader with full enthusiasm. Whilst the deadly pandemic, people are taking care of themselves by staying at home.

You built this, so enjoy. https://t.co/z1qQVjoHOB

It is for the first time that hustle and bustle in the country’s capital have been replaced by a state of emptiness. The elected president through US election poll 2020 would have to deal with the burgeoning health and financial crises in the country.

Previous article
Kabul University: At least 22 killed in a terrorist attack in the Afghan capital
Next article
His House: A spooky Netflix Horror flick