Sanctions by Emmanuel Macron will never be tolerated

"We will not give up cartoons", set ahead by one of the pioneers of this century often called here as President of France Emmanuel Macron in a nationally televised ceremony at the Sorbonne University in Paris on the 22nd of October.

“We will not give up cartoons”, set ahead by one of the pioneers of this century often called here as President of France Emmanuel Macron in a nationally televised ceremony at the Sorbonne University in Paris on the 22nd of October while justifying his stance of that anti-Islamic act with a dupe argument that everyone has freedom of expression and speech. “And I will always defend freedom of speech in my country, of thought, of drawing.”

His controversial articulations regarding Islam on the station of Al Jazeera deposit fluctuations on social media making the Muslims from all over the World get infuriated and boycott French products. There are numerous demonstrations in Turkey, Lebanon and India followed by the anti-France protests across all over the Muslim world lead by Islamist leaders. As the Recep Tayyip Erdogan, President of Turkey discerned in response to the parodies;

Western countries mocking Islam wanted to “Relaunch the Crusades,” adding that standing against attacks on the prophet was “An issue of honour for us.”

“For to be free is not merely to cast off one’s chains, but to live in a way that respects and enhances the freedom of others.” Nelson said But somebody asks him, “From where it is to be found? What if it can’t be found?”

Past is witnessed that Islam envisioned continuous castigation

If we go through with our besieging past, we’ll find that there are a number of series of certain cartoons sketching the Holy embodiment of Islam consistently profaning the Islamic values by the various secularist governments. In this case, various rallies of Islamic Groups and hardliners had been provoked around the Muslim World. The flow chart of those humiliations of which our past gets overwhelmed seems like: 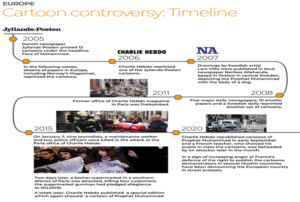 As “Freedom to practice one’s own religion doesn’t mean belittling other religions.” said Abhijit Naskar in his book Operation Justice.

So, my question is that what sort of leader that would be if he’s unable to understand that there must be freedom of beliefs and in the world of millions of diasporas of different faiths, this seems an intense condemnation? Through these denunciations, he was commencing an Islamic radicalism with the promulgation of Islam to be in crisis all over the world. Ken Poirot said that:

“The less the freedom, the more illegitimate the leadership.”

With using certain words like “No concessions” it is not undermined that someone’s religion like Islam really get demolished rather it’s the breath-taking moment for that leader who never has had the traits of a momentous head upon which the outlook of a state depends. This disruption causes to effect all over the world by upheaving as Imran Khan tweeted that:

“Hallmark of a leader is he unites human beings, as Mandela did, rather than dividing them. This is a time when Pres. Emmanuel Macron could have put healing touch & denied space to extremists rather than creating further polarization & marginalization that inevitably leads to radicalization.”

Promulgating Islamophobia presents the Religion Islam and Muslims merely a black figure in front of the World. There is once again the need of the time to emerge Harun al Rashid and Usman like absolute leaders in the course again that’ll definitely show them their real places once again.

Probably, on the 20th of October French authorities said they would close a Paris mosque in a clampdown on “radical Islam” after the beheading of Paty.  It is also to be noted that Islam is the 2nd largest religion in the world after Christianity reached about 1.6 billion Muslims approximately according to the calculus of 2010 that also sets some tingling in them. As Erdogan portrayed it in a very despicable manner saying that: What is the problem of this person called Emmanuel Macron with Muslims and Islam?”

In reaction, French authorities directly slammed Erdogan by drawing various caricatures of his persona in their Cartoons as well. They are actually promoting modern warfare means to get smarter domination all over the world.

This directly raises questions on their economic and social telegraphs as well as introducing a downfall of 28 billion on the very first day of the market opening after raising the slogan #Boycott French Products. Their company’s stock continues to plummet. So thinking to disdain ones religion is actually the humiliation of their own values pertaining to their specific Religion and thus, dropping them down and down.

But alliances for communism and security are the main tools of Frans-Pak foreign Policies in order to achieve their national objectives which kept them on one common ground in the past course. Various agreements were signed regarding economic cooperation between them having varied tensions in the air. Similarly, this relation almost survived rather a serious peril of breaking of economic ties with Paris to Islamabad posed serious damage to the economic relations between France and Pakistan.

In 2017, bilateral trade between France and Pakistan stood at €1.4 billion, up +4.6% year-on-year. France’s total sales now make Pakistan 67th out of our customers (64th in 2016) showing us that there must be good terms somehow as far as foreign affairs are concerned.

Moreover, there is certain other security cooperation between them focuses on the contentions of terrorism, documentary fraud, and elite military training along with French language training for military cantonments. But the violation of any sort of religion no matter to whom it belonged or what sort of worldly grudges you are in with that state or figure is not acceptable at all. Religion is presumed to be in accordance with one’s own conscience. Backing with the words of James Madison of his book A Memorial And Remonstrance, On The Religious Rights Of Man  that:

“The Religion then of every man must be left to the conviction and conscience of every man, and it is the right of every man to exercise it as these may dictate. This right is in its nature an unalienable right.”

Hence, no one has a right to raise his thick fingers on these sorts of delicate contentions.

Islam endowed nothing but the fearless races in it

To all intents and purposes, the French products are penetrated badly in our lives and so our approximately 40% imports depend upon France but it is an utmost duty of us being an Islamic country, a true Muslims and Pioneers of Islam to manifest a promising response to this action. We have to make a proper devise plan through which we go for balancing the needs of the people by providing them goods of the same quality as like France in order not to suffer our people from the boycott of French products in the country.

Moreover, if needed Pakistan will among one of the foremost Islamic countries to get into the extreme in order to maintain the integrity of his very religion so that on the Day of Judgment every citizen will manage to make eye contact with his Prophet Muhammad (SAW) proudly. As marked by the saying of Imam Ali (R.A), “Our mothers called us Haider and we were never afraid of anything but sins.” It demands from all the true Muslims of the world to stand under the very flag of ‘La illala illalah’ and fight until the last drop of blood. Going with the words of Almashhoor Muslim American instructor Nouman Ali Khan:

“SO, WHAT IF THIS LIFE ISN’T PERFECT? IT’S NOT JANNAH.”