Coronavirus: The wake up call and second wave around the globe

The cases of Coronavirus are steadily upsurging and so witnessed across some areas of the world as Europe, South East Asia and USA etc.

The whole world is primarily concerned in the present epoch of when and how to uplift the restrictions posed by Coronavirus as a precautionary manoeuvre. However, at the same time, it supposed to be equally focused on acquiring the best ways to avoid the second spell of that treacherous epidemic infections in winter specifically. The cases of Coronavirus are steadily upsurging and so witnessed across some areas of the world as Europe, South East Asia and USA etc.

After the sustained declination in the cases over the recent past months, people have burgeoned their steps into the local markets, resume to the educational institutes, sudden and adverse rebuffing of wearing masks in a crowded bunch of the jumble sale specifically finding themselves fully free after the prolonged stint of quarantine shit.

This kind of riposte ultimately results in the sabotage of all the painstaking of the past few months of quarantines and lockdowns in vain. It gives the severe consequences and experiences a direct relation with the escalation of the Coronavirus specimen globally. The situation of the world described by the World Health Organization as:

Situation by WHO Region

Probing the USA in the novel of current Coronavirus disposition

As it seems to be rolling in, the USA gradually uplifted the restrictions and started to normalize the daily practices coming to the routine. However, due to the emergence of several cases of coronavirus in its various states assured us that the second wave has also sought our way ahead. As in Nyt, it is asserted that:

“Officials in California, Florida and Texas, the states with the most known infections, have identified a combined 2.4 million cases. In a few less populous states, including Vermont and Maine, there are fewer than 10,000 patients.”

After seeing that abrupt explosion in the cases of COVID-19, it seems almost reasonable to wonder that if there must be a resurgence of forging infections related to corona Virus after the disdain but if we talk about specifically the USA the first wave does not completely say goodbye and still persisting today in different areas at different times in different ways. Hence, calling it a second wave is obstinate rather it never hides its previous spikes fully. This is the present situation of October 29 in the USA primarily discerns the tallies of corona Virus in the days before: 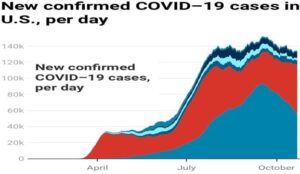 The epidemiological curve of Coronavirus in Europe

Europeans ought to be also struggling nowadays to curb a surge in coronavirus infections as the region’s weekly tally had extended to 30,00,000 outpatients. WHO’s regional director of Europe, Hans Kluge said in a press briefing on Thursday, “Weekly cases have now exceeded those reported when the pandemic first peaked in Europe in March. We have a very serious situation unfolding before us.”

Hence, provoking a number of cases in September and October seems to be the wakeup call for the Europeans also. France on the 16th of September managed to attain the corona cases of about 9,784 which reportedly considered as the highest in the country. Similarly, The statement of the Health ministry on the 16th of September reads that “Italy has registered 1,452 new cases in the last 24 hours, up from 1,229 new cases on Tuesday, although this was partly attributed to a sharp increase in coronavirus tests, news agency ANSA reported.”

Likewise in Spain, the pandemic is also showing its pinnacles as it embraces once again the restrictions of targeted lockdowns due to an upheaval of Coronavirus cases in the region. Remarking the rise of pandemic again, Hans Kluge further said that when weekly tally extended to 3,00,000 cases in the 2nd week of September 2020 as:

“More than half of European countries have reported a greater-than-10% increase in cases in the past two weeks. Of those, seven countries have seen newly reported cases increase more than two-fold in the same period.”

Asian’s wake up call in reference to the Coronavirus

Asia is also getting a wakeup call from coronavirus specifically when the majority doesn’t leave the former spell of danger significantly. It is to be noted that the Asians are mostly less ordained and illiterate poor geezers which can’t afford the luxury of being in a lockdown because they are born in a country of extreme deprivation. These countries will never swallow another hit if broke by Coronavirus in the stature of its second spell. Likewise,

Unless these countries are highly dependent on their imports, it is almost impossible for them to aggravate a lockdown once again. That’s why the prompted need of a vaccine for these countries is a great deal and proves to be a U-turn to their lives.

Though we can slow the rate of spreading of Coronavirus through several confinements but the only way to prevent it is the introduction of a vaccine. The rapid pace at which our researchers are advancing day by day the COVID-19 vaccine specimen is actually a sort of testament to the lessons that have been learnt from past other R&D vaccines and mutual partnerships across the sectors. According to WHO daily accounts:

“There are currently more than 100 COVID-19 vaccine candidates under development, with a number of these in the human trial phase.”

Considering it a hot topic, many controversies on its behalf has been displayed as:

At a news conference Wednesday, the former president said that the vaccine “could be announced in October” and that as soon as it is available it can be distributed “immediately” to the general public. “To the general public immediately — when we go, we go,” Joe Biden said.

In response to this Trump, the former presidents declare that:

“Biden’s comments were ‘anti-vaccine’ and “hurting the importance of what we’re doing.” He added, “I know that if they were in this position, they’d be saying how wonderful it is.”

Similarly, it is not absurd to say that it serves as a political strives to manage one’s less-Influential dark figure along with waving certain doubts across the community. But the thing which is to noted that when it’ll come after all these trials and tribulations? We’ve found that:

“Researchers are testing 48 vaccines in clinical trials on humans, and at least 89 preclinical vaccines are under active investigation in animals.”

But following the words of Professor Annelies Wilder-Smith, professor of emerging infectious diseases at the London School of Hygiene and Tropical Medicine, certification;

“Like most vaccinologists, I don’t think this vaccine will be ready before 18 months.”

Hence, we have to wait for more and for the present, we just have to assure that along with following the SOPs and all the restrictions marked by the demand of the current epoch we have to: “Through transparent knowledge-sharing, tailored support on the ground, and steadfast solidarity, we will beat coronavirus.”

Not for us but the sake of our esteemed country.